Skip to content
Home > News and Events > The Red Shoes

The shock of arrival was magical: such a beautiful staging, such glorious detail, and such wonderful costumes.

And the surprises kept coming, not least Kathryn Clements’s brilliant choreography so astonishingly brought to life by the cast, but in particular by Tom…  I tend to resist naming names in production reviews – especially as so much of what Miss Mayes and Mr Williams bring to the stage is ensemble based – but Tom’s performance was quite exceptional.  His dancing alone compelled the viewer; but, without words, that he spoke through movement and expression so well of his angst was all the more remarkable.  And the ambiguity created by casting him ‘the girl’ captured all the more tellingly the human scope of the fable.  Around him the ensemble wove its spell of desire, despair and derision.  Our quartet above guiding the old lady’s story; a preacher at odds with the Word; angels and clowns, harlequins and charlatans, acrobats and a majorette (very fine work!), and the most surgically relaxed knife thrower one could have wished for.  And still more visual delights: the black and the white offering the most dramatic contrast to the red, teasingly introduced and vividly unmissable.

The story is chilling, the ending at best uneasy; but this production of The Red Shoes transcended such disquiet to leave the audience moved, beguiled and hugely impressed.  Many congratulations to the cast, to the directors, and to the backstage team for an outstanding evening’s entertainment! 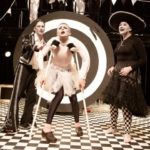 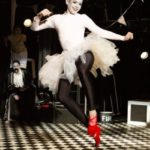 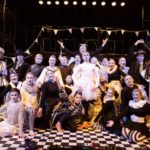 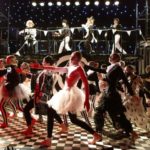