I know that a couple of hours in the Dome at Woodbridge listening to speeches and applauding the year’s prize winners is not everyone’s dream Saturday morning.  But now I am retired I can choose not to attend, except that as OW president I am invited and so it seems churlish not to accept.  I was honoured last year to have a prize for French awarded, bearing my name, so I was keen to see who followed the worthy first winner, James Bellhouse (2017). I was thrilled to discover that the French prize went to Gabriella Zins (2018) whom I knew to be another worthy recipient, simply from seeing her in language competitions, on exchanges and study trips not just in France but also in Spain.  Gabby is going on to study chemistry at Birmingham University, not surprisingly with a year abroad included; I hope she will choose France for that. What I had not realised is that my youngest tutees in my last year of teaching had left school and they were both prizewinners too. Alyssa Hedley (2018) won the Psychology Prize and will go on to study that subject at the University of East Anglia.  It was good to hear of the many other accomplishments she developed over her time at Woodbridge, including acting (she was a hilarious librarian last time I saw her) and playing the flute, on which I heard her play a solo at Snape Maltings.  She also helped out as a classroom assistant at Thomas Wolsey School in Ipswich. Adam Wildbore (2018) won the Hewlett Cup for all-round contribution to school life.  In addition to A levels which are leading him to Exeter University to study geography, Adam managed to complete his gold Duke of Edinburgh award, was a sports leader and managing director of Young Enterprise, represented the school and the region in a range of sports and spoke at the Model United Nations in Paris. I was so pleased that the final remaining members of B-GBB and the winner of the French prize were so successful at school and it was good to see these fresh new OWs once again; I wish them all the very best for their degrees and beyond. 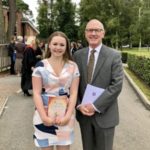 Last week both the U14 and U16 netball teams had their respective South Suffolk netball tournaments.  These tournaments lead on...
Read Article

Our 1st hockey team had a massive week; learning, improving and growing – also winning for all their efforts!  Here’s...
Read Article

Boasting a sixth form with over 400 pupils and an excellent sporting pedigree, Copleston were always going to be tough...
Read Article