It is sobering when an OW who left school in 2010 says that he feels old.  The Christmas Drinks event at the King’s Head just before Christmas usually attracts OWs who have left fairly recently and are still at university, in the middle of an apprenticeship, or have just started out in the world of work.  Sam Rowell who left only seven years ago was the OW feeling old, so I chatted to him to try and make him feel better about his age.  It is all relative…  Sam is now working for IBM in data analysis and like most of the others involved in computing now has a smart pair of spectacles to complete the serious intellectual look.  Marc Jeffreys and Aron Lankester are both working for BT in data analysis too (though they aren’t allowed to say much about it) and Harold Elman who graduated in computer science is taking another degree, this time in mathematics.  Harold always did love study, even when it was GCSE French!

I have not seen Robin Hartley since he left the Sixth Form.  He is currently engaged in a PhD in materials science at Bristol, having taken an engineering conversion year after his degree in chemistry; I wasn’t aware that such courses existed but it sounds a good route in to engineering.  And he still has time for dance – amazing!  Guy Stow and Andrew Norman were present along with Dom Crane who is in his second year of chemistry at York but hasn’t done much drama this year, which given how much he did when at school is sad, but he is going to get back in to it he says.  Applying for a third-year placement in industry is taking up much of his time at the moment.  Best of luck!

Millie Hooper graduated in linguistics at Cambridge this summer and is very excited about her imminent start in the world of casting, whilst her peer, Rosa Gaffney, is concerned that the MS Word spellchecker does not accept Japanologist which is what she considers herself.  I see her more as a Nipponist.  With Jake Isabell there (whose hair is quite spectacular and yet mostly under control) it was just like being in the GCSE French classroom again, in a good way.

Helena Robson has stayed on in Edinburgh after a degree in History of Art to work in the photography department of the National Gallery of Scotland, which she is loving.  Hannah Whitmore has graduated at Surrey University and has remained there for a PhD in plant chemistry which she is hugely enjoying.  She has encouraged me to keep working on one of her grade 7 cello pieces which I have just started, a scary tarantella.  I am unsure I’ll ever be able to play it as well as Hannah though!

Rhiannon Humphreys has loved her first term at Cardiff reading English whilst continuing to sing.  David Spray, also at Cardiff but studying geography, had been singing with Rhiannon and some other Chamber Choir alumni in the Thoroughfare that morning, raising several hundred pounds for Crisis in just two hours.  Also at Cardiff is Maddyson Chan who is studying pharmacy whilst keeping up her dancing.  Isabella Pincombe went straight to the Royal Academy of Music to study the oboe after A levels and is loving the range of opportunities for top-flight performance opportunities there.

George Cory is looking forward to his Admiralty Interview Board in February, having passed his flying aptitude tests with scores at the top of the pile.  Brothers Tom and Nick Elmer were on good form.  Tom is in his fifth year of medicine (or is it sixth?) at Newcastle whilst Nick is studying mathematics at Southampton after doing A levels at the Defence Sixth Form College, Welbeck.  He is having second thoughts about a commission in the army.  Sister Maddy Elmer could not be at the Christmas Drinks as she was working on a photo shoot, in Turkey, so that must have been tough!

Julie Maclean has started a degree in anthropology at the University of Toronto and is really enjoying her time there.  It was good to hear of her elder brothers Alex and Ian too.  I just managed to catch up with Ellisse Morey as I was leaving.  She has stayed true to her linguistic vocation at A level and is now studying French, Spanish and Italian at Hull (a university I enjoyed visiting this summer as part of the City of Culture experience) whilst Ella Burdett is reading English at Edinburgh and loving the experience.

As Chairman of the OWs, Rob Turner had the pleasure of welcoming his own daughter, Lucy-May, to her first OW event since she left the Sixth Form in the summer, though he was probably just  wondering where the last 18 years have gone.  It was also good to catch up with other OW Committee members Rick Hobson, Ken Bailey, and David Houchell who had a couple of samples of OW branded polo shirts on display.

It was a particular pleasure to see Sue Leslie, widow of the legendary mathematics teacher,  housemaster and raconteur, Mr Jeff Leslie.  She reminded me that it was because of the French exchange that Jeff became such a Francophile, insinuating useful knowledge of French cheese and wine in to maths lessons and sixth form assemblies.  It was also a favourite topic of conversation at lunch!  Their two children, both OWs, Catherine and Max are well.  Max is a practising dentist (having got the idea of dentistry from the father of his French exchange partner), and he is busy building a house in Cambridge.

It was also good to catch up with various staff, present and previous, including Mr Edwards, who had just been supporting former Chamber Choir members on the Thoroughfare, Mr and Mrs Hillman (Heads of Computing and Chemistry respectively), Mrs Brown (Director of Sixth Form and Careers at school), Mrs Green (formerly Head of French) who is about to walk round the Isle of Wight for a mental health charity and Mr Ringer who did so much for design and sailing at Woodbridge.  He said that his OW daughter, Frances Ringer, is now teaching music in Hertfordshire giving her opportunities to play keyboards, double bass, a range of wind instruments and to sing; her time in the music department at school was not wasted!

There were lots of you I did not manage to talk to, but get in touch or indeed, let’s chat at another OW event in 2018!  And I was mortified to get one name wrong in the three hours; sorry, Josef! 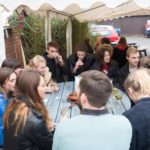 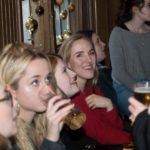 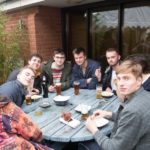