Young pupils at Woodbridge School have been joined on stage by Lord Marlesford and the Rt Hon Sir John Waite, a former Lord Justice of Appeal, for the exciting debut of ‘The Trial of Paris’ play. Pupils in Years 7 and 8 performed the play to two audiences on Friday, 19 January, in the Science Lecture Theatre.

Written by Anne Wright, Woodbridge School’s Head of Classics, ‘The Trial of Paris’ is a crossover between Greek mythology and a courtroom drama. The play sees Paris of Troy on trial for starting the Trojan War, with pupils playing barristers and witnesses including Aphrodite and Zeus.

Lord Marlesford, President of the Suffolk Preservation Society and former Parliamentary lobby correspondent for The Economist, joined the young cast on stage in character as a judge for the first ‘Trial of Paris’ performance. Sir John Waite took to the stage as a judge for the second performance, bringing his lifetime experience as a former Lord Justice of Appeal. The play encouraged the audience to take an interactive role as jury, by deciding whether Paris was innocent or guilty.

Anne Wright said: “I am incredibly proud of the cast, who were utterly convincing, and I should like to thank our judges for their thought-provoking comments about the importance of the rule of Law.”

Latin is very popular at Woodbridge School for pupils of all ages, from Year 7 to A Level. Classical Greek is also available (both as an academic option and as an extra-curricular activity), while Classical Civilisation is offered at A Level. The school has a proud tradition of sending Classicists to Oxford and Cambridge Universities and, this year, a Woodbridge School pupil has been offered a place to read Classics at Corpus Christi College, Oxford. 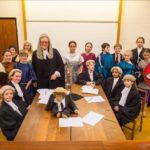 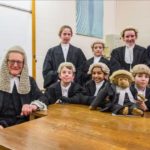