On Saturday 25 November, Amy Goddard, Anna Jackson, Willa Cole, Iris Morton, Ella Pitt and Ruby Vinton travelled down excitedly in the school minibus to Sevenoaks to compete in the ESAA National Cross Country Championships.  This was the 2nd year in a row for Amy and Anna to compete at the Nationals (as last year we were in Formby, Liverpool), so they knew what to expect. This team of Junior Girls had worked hard in the previous rounds both at the County and Regional competitions, so to make it through to Nationals was a superb achievement. 27 schools throughout the UK made it through to the finals, out of 580 school entries.

After a gentle walk around the course, the girls were ready for the challenge. With the teams all lined up in their pens waiting patiently for the starting gun, shivering due to the frosty and cold conditions, the girls knew they had to have a good start – especially as 100metres into the course, there was a slight incline which narrowed so needed to ensure they were in a good position. The girls tried to fight their way through but found it tough, however, they continued to battle and fight as hard as they could. Throughout the race, the girls were each picking off other competitors, to try and ensure we had four good scores (as four out of the six runners placing counted towards the final position). In the last 400metres, what happened next was short of a miracle. Ruby Vinton (who was competing a year young – as well as being one of the smallest runners!) was in 7th place. The determination on her face and pure grit was phenomenal. In the last 200 metres, Ruby was on fire, overtaking 6th place, 5th place, 4th place, 3rd place and then 2nd place to ensure she was in a medal winning position. Millfield’s runner was approaching the finish line in 1st place, although had slowed down, thinking she had won…all of a sudden, Ruby sprinted straight past her to take 1st place…what an achievement! Not even out of breath! Tears were flowing as what had just happened was barely believable. Definitely one of the best finishes of the competition. This spurred the other team members to push hard for the last 400 metres and so they did. Amy finished in 67th position, Anna in 115th, Willa 146th, Ella 150 and Iris 152. An excellent team effort, girls, well done! The team finished 23rd overall out of 27. We look forward to next year as the National Finals will be at Woodbridge when we play host.

Thank you to all the parents who travelled down to Sevenoaks to support the team, and to Mark Goddard for geeing the girls up and preparing them so perfectly for the race. 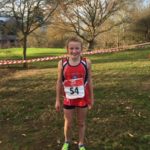 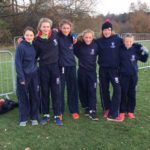