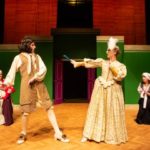 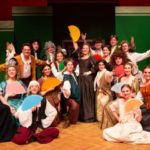 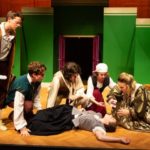 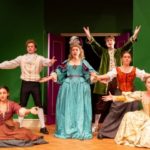 The King is dead, long live the King! And so the story ended for Nell, and for us, at least at the Seckford Theatre. But Nell had delighted her King and Country... and her audience!, in the meantime.  And so it proved here, too, some 320 years later, give or take (something one gets the sense she did rather a lot).  In a magnificent restoration of her reputation, a reputation founded on the opportunities a Nation's restoration afforded, Jessica Swale's take on the Nell Gwynn story was brought gloriously, sumptuously, and most wittily to light by our Sixth Formers.  Wigs and bodices (mostly for the females), feathers and flounce; hats and dresses (and here - a first for Woodbridge School - I must mention the extraordinary work of Matilda Royal-Dawson in her design and making of Queen Catherine's costume: quite the most beautiful on stage), waistcoats and buckles.  Visually stunning, but theatrically also: a wonderfully entertaining, slick and witty first half gave way to a surprisingly moving denouement.  This was no simple bit of fun, but a proper exploration of fame, favour and fortune tinged with loss, alienation, competition and redemption.  Nell won and lost in the extreme while all about her measured their takings in life more evenly, but no less enthusiastically and passionately (particularly the King, oh suave man of low principle and high cunning).  There were the good and the foolish, the proud and the fallen; there was song and dance.  And in the end I felt that, yes, for all the trials, there was the sense of a happy ending.  Well done Nell!  You lived for the 'now', indeed!  And well done all around you too, carried in the wake of your story but giving it the buoyancy it warranted.  A brilliant cast, fabulous setting, glorious costuming, and expert direction - what more could one ask?  Encore!, of course!
Share
Share
More latest news
View all our latest news articles
Upcoming events
Updated on a regular basis, our events calendar is the central reference for all upcoming exam dates, fixtures, fund-raisers, performances and other notable dates for your diary.
Find out what’s happening when