A Saturday evening – and in the Library: two new ventures for us (though the Library has been a familiar lunchtime venue for a little while now).  It’s nice to make a positive impression, and I have to say the performances were terrific.  Mr Milton did a fine job introducing musicians and repertoire alike (and even managed to take precisely the number of words required to allow William Emery and Jenny Clare the time they needed to join us direct from London!); and the musicians did an even finer job of living up to their billing.  Add to the mix excellent hospitality from the Friends of Woodbridge Library, and readers will sense the audience left immensely happy and thoroughly well treated.

Cellos and flutes, then a trio and a quartet comprised the first half (before the mulled wine and mince pies); so many very young players – but such maturity of expression and poise of delivery.  Variety too – and this was a theme very well carried forward into the second half.  Guitars first – such a lovely sound rather too rarely heard in ensemble: Bob Power’s Suite an absolute delight; a second Quartet (Allegro in name, and allegro in nature thanks to Mozart).  And then two quite magnificent performances to end:

First, William and Jenny, viola and violin, Mozart’s String Duo.  Oh my goodness – the way they interacted: the musical conversation was quite stunning as theme passed back and forth, now one in the lead, now the other.  How lucky we were that their train had been on time!

And at the close, the Chamber Orchestra in full playing Holst’s St Paul’s Suite – Mr Milton almost dancing at the front, and the players responding with a deftness of touch, and range of expression, that was stunningly professional.  No wonder the applause were so long – long enough to gain an encore, and Pachelbel’s Canon closed the evening.  I was glowing on the way home, even on my bike in the chill winter air… 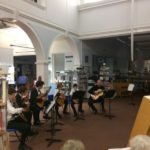 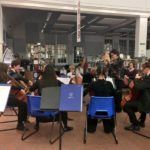