President’s Blog May 2018: On The Royal Navy, OWs, their Parents and Even Children!

I bumped in to Emma Gray (almost literally) in the Seckford Theatre doorway after a performance of the school’s musical, The Sound of Music.  (If you haven’t seen a musical recently, try one at Woodbridge as they are real, top-end shows but sadly only every other year.)  Emma, who left in 1998,  was a sergeant in the CCF Army Section and introduced her daughter who had enjoyed the show and who is excited to be entering Year 7 in September.  In the rush I couldn’t glean much more, other than the fact that Emma’s daughter intends to join the CCF in Year 9.  Wise choice! Before the performance I met some parents of OWs who filled me in on what their children are up to now.  James Taylor joined the school for the Sixth Form and became a much respected and appreciated member of the community, enjoying maths and computing in particular.  His degree at Bath University included a placement at Goldman Sachs in London where he so impressed that he was offered a job after graduation.  He has been working in London and has now just moved to their New York office.  His mother is rightly proud of James’s achievements and said that Woodbridge School “was the making of him”.  We are also very proud of having been a part of his journey. It was lovely to see Mr and Mrs Smith again that evening, parents of Sophia and Jamie.  Their children used to come to school with the Mitchels family, down the A12 from Yoxford or thereabouts.  Sophia is now in charge of training for Deutsche Bank where her interpersonal skills will be essential.  Jamie works for a large company in London, trying to make their website user friendly; that sounds quite a challenge.  What I forgot to ask is if either Jamie or Sophia is still singing after their time in the Chamber Choir at Woodbridge. Two OWs with a professional interest in the Royal Navy hoved to recently.  Gabriel Bambridge is completing the clinical part of a degree in medicine at Magdalen College, Oxford, where he was not only a choral scholar but the Head Academic Clerk of the choir in his third year, while he completed his neuroscience degree.  He has been commissioned in to the Royal Navy as a Surgeon Sub Lieutenant and is looking forward to getting on with his naval training, but only after he has completed his placement in a hospital in Thailand.  He too is an alumnus of the Chamber Choir, having been encouraged to apply for a music scholarship at Woodbridge by the then Head of Singing, Mrs Elspeth Davidson.  I bet Gabriel doesn’t have much time for singing at the moment! George Cory who left in 2017 has just been through the Admiralty Interview Board as he wants to fly with the Royal Navy.  He achieved the highest mark in his flying aptitude test before AIB and went off to the selection days with that under his belt, but aware that he would be up against people nearing the end of a degree or indeed having graduated, and so a bit older and more experienced than him.  But his experience of the RAF Section in the CCF at Woodbridge, including being a key member of the Cranwell competition team for some years, must have stood him in very good stead as he passed AIB!  That is not the end of the process but he has been through two stages and passed both so that is a very good start.  Best of luck to George with his commission. I was able to catch up with a former colleague and fellow CCF Army Section officer when I was in Edinburgh recently.  Paul Kesterton was Head of Games in the 1990s and he went on to similar posts at Liverpool College and then Fettes College in Edinburgh, after which the lure of Scottish Rugby was too strong.  He currently mentors younger national players, helping them with training and education needs for life after rugby and when not doing that he covers the whole of Scotland to accredit rugby coaches.  Given that his sons go to school in Scotland and have Scottish accents, I wonder who they support against England.  In fact, who does Paul support nowadays?  We had a good time (I treated him to lunch at Sainsbury’s opposite Murrayfield after all!) reminiscing about the early days of Stephen Coles’ headmastership, the CCF, Norway and Iceland expeditions…  During one CCF annual camp, he was particularly excited at being able to pull rank on a squad of Marines who arrived for an overnight stop at Okehampton Camp after an exercise on Dartmoor.  Paul was duty officer and relished keeping the young Marines away from our female cadets. Happy days. And if you attend a Scottish rugby international match and see a young bagpiper who looks like a mini-Paul, earning lots of money from his playing, that’ll be one of PK’s sons! More anon about the Old Woodbridgians’ Senior Alumni Lunch earlier in February, but for the moment, here is a postcard (c1930s?) I found of the interior of the chapel.  Even in the 1960s there was no organ and OWs remembered various boys or masters bashing hymns out on the piano in the south transept (OK, the alcove on the right) where the choir sat.  It looks all very high Anglican with six lights on the altar and immensely tall riddle posts (from rideau, French for curtain), so high in fact that the candles on them have scorched the ceiling.  And the statue of the Blessed Virgin Mary has flowers and her own candles.  There are no stalls for the chaplain and the Headmaster and Housemasters then.  Note that there were five hymns to get through though! 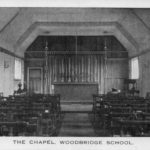 Woodbridge had the privilege and honour of hosting the Suffolk Schools Cross Country Trials final in the School grounds on Thursday 13...
Read Article

Girls from Years 7 to 13 will be able to compete online in The Girls Schools Chess League, which begins...
Read Article

Wins for Woodbridge at Cross Country

a place on the East of England team to compete in the London Mini Marathon in October.
Read Article